Hi kids, this probably will be filed under the wicked category due to its fat content, but living a healthy lifestyle does not mean you have to ban good recipes – just moderate your diet.

Seriously, this recipe tastes like authentic American Chinese restaurant-quality General Tso’s and you must give this one a try.  You will thank me.

From Diana at appetiteforchina.com.  I am waiting to get permission to put the full recipe up here, but here is the ingredient list and a link to the recipe on her site:

I have now discovered a cleaner way to make this casserole that’s super healthy and 70% lower in fat.  We follow the basic recipe below, substituting the usual suspects with chicken sausage (the only sausage we eat now), egg beaters, fresh mushrooms, mushroom broth reduction (in lieu of canned soup), shredded white Irish cheddar and omitting the fried onions.

Sorry guys, you had to go.  I look too good naked to ever take you back.

Looking for that comfort food recipe that will make you famous in your community? The meal that people will ask you for time and time again, “Oh this is lovely! What’s the recipe?”  Behold THE breakfast casserole.

The most requested meal for the last 20 years in our household!  Though we only generally make it for Christmas morning, as I’m now grown and a thousand miles away from the coup, I still like to whip this up a couple of times a year.  Wicked, for sure, but very satisfying!  Best of all is that you can make this the night before (best that way) and just whack it in the oven when you wake up.

This one is a keeper and as infamous as Dotty’s Bicardi Rum Cake.  Try this out, and your friends and family will come back to you again and again!  Courtesy of Southern Living’s  1986 Annual Cookbook.  Yup, from 1986.

Remove from fridge and let stand on the counter for 30 minutes. Bake uncovered at 325 degrees F for 50-55 minutes. Center should appear “set” and not liquid.

Sprinkle cheese over the top and return to the over for an additional five minutes or until melted. 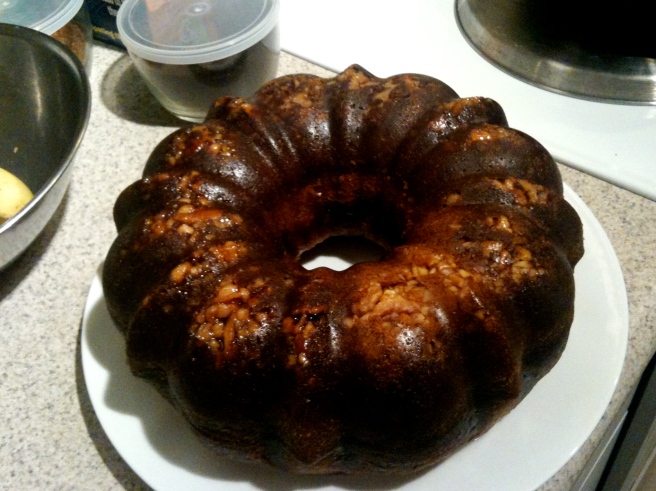 Now for a wicked recipe. We’re all human and I try to make this blog realistic by including a few treats the occasional indulgence.  Also note that this is the only recipe on the entire site that is based on a pre-made mix that you can get at the market.  Though I try to keep our menu as clean and natural (i.e., from scratch) this recipe is a winner that our family has been sharing with others for over 30 years.

Scroll down for instructional photos.

The foodie romance behind this recipe: This will be the moistest rum cake you’ve ever had. The difference is by pouring the glaze onto the cake whilst still in the pan and letting it soak in for an extended period. All other recipes I’ve seen call for piercing holes on the top of the cake and then drizzling the glaze over the top, where most of it will drip off of the cake. You will enjoy this, I promise. Bon Appétit!

Preheat oven to 350 degrees. To prepare the pan, spray a Bundt pan (or two small ones) thoroughly with cooking spray. Place pecan halves in bottom of pan in decorative fashion. Sprinkle on top of that the chopped pecans. To prepare the cake, in a large mixing bowl combine cake mix, pudding mix, water, butter and rum. Mix thoroughly. Add eggs, one at a time, beating in well. Pour batter into prepared pan and bake for 50-60 minutes (approximately 30 minutes if using two small pans), or until toothpick comes out clean.

About five minutes before the cake is done, prepare glaze. Heat in small pan the butter, water and sugar. Bring to a boil. Cook for a few minutes until thickened a bit. Pour in rum and stir constantly for about a minute. Remove from heat.

Remove cake from oven and keep in Bundt pan. Pour ALL of the glaze over the cake immediately and let cool for 40-60 minutes in its pan. You may feel that you’re drowning the cake but it will absorb completely.  Invert onto cake plate and wrap tight.  The result will be a heavy cake that will be surprisingly light and versatile — perfect for dessert with coffee or for breakfast in place of coffee cake.

Please share your comments if you give it a try this holiday season. Merry Christmas!

A pasty — the “a” pronounced like in “Cat” — is a British staple that originated from Cornwall.  It’s like a turnover, or a pot pie, (minus the pie part) that can be served hot or cold.

And just a note:

Before people start complaining as to its authenticity, we all know that it’s not Cornish!  Just think about the West’s take on Chinese food, and we suddenly have “Asian Fusion;” my take on a pasty is a healthier chicken or turkey breast in lieu of beef, and a cheat by using puff pastry and gravy mix.  I also prefer not to mince the breast but bake it whole to retain its juices, so don’t tell me, I already know.  Enjoy with brown gravy and roasted potatoes.

I did put this in the “wicked” category, but we like comfort food just like anyone else, and sometimes a good meal just calls for butter and pastry.  But I should get bonus points by controlling our portions.  We usually cook this recipe for 2 and split it (eat small portions, often!) but this may be good for one person, depending on the size of the chicken breast. I prefer to use one cast iron skillet for the whole meal so we can deglaze and create a savory gravy with the bits left over in the skillet, so do not clean or rinse skillet as you remove items from pan.  We want to collect all the chicken and veggie juices and reduce for gravy.

Let puff pastry defrost over night in fridge or out on the counter for 30 minutes (keep covered to prevent pastry from drying out).

Heat oil on medium heat until near smoking, and sear each side of chicken breast (4 minutes or until browned per side), reduce heat and cover for 10 minutes, turning breast once.  Breast will be done once juices run clear.  Set aside to rest.

While the chicken is cooking, roll out pastry on a lightly floured surface to about ¼ inch thickness, making a big rectangle.  Cover with a damp paper towel to keep pastry from drying out.

In same skillet, add the veggies (except cilantro) and cook over medium heat until mushrooms exude liquid and onions start to turn clear.  Add broth, bring to a boil and then reduce heat and simmer until most of the liquid has evaporated. Toss in the cilantro and stir until heated through.

**A pasty is basically a piece of pastry folded in half, so you will be placing meat and veggies on one side of the pastry, leaving room to pinch or fold the sides in to make a seal.  Check out this video on making a traditional lamb pasty here to see how to assemble.

Remove paper towels from pastry and begin assembling, first by placing the veggie mixture on one side of the pastry, and top with the chicken breast.

Brush egg wash on the edges of the exposed pastry, and fold the other side over the mixture, being sure to fold edges of pastry over tightly.  Take a fork and press down all along its seam.

Brush with more egg wash and bake at 350 degrees for 25 minutes, or until pastry is fluffy and golden.  Feel free to brush with more wash halfway through the baking process to enhance colour.

As the pasty is baking, add butt to skillet and bring to medium heat.  Add the wine and stir constantly with a wooden spoon.  The wine will bubble and steam briefly before coming down in temperature.  This is deglazing, where the wine and steam help us scrape up the leftover chicken and veggie bits that will make our gravy so savory.  Toss in a few leftover thinly-sliced mushrooms.

Add gravy mix and water to skillet and cook according to packet directions.

So we’ll not all perfect.  Below is a recipe for the best homemade french fries I have ever had the pleasure of tasting.  A secret tip that many restaurants put to use is batter.  Yup, healthy, right?  But this wouldn’t be a well-balanced cooking site unless we featured a few naughty sides here and there!

Slice the potatoes into French fries and place in cold water to keep them from turning brown as you prepare batter and recipe.

Heat oil in a large skillet over medium-high heat. Whilst oil is heating, sift the flower, garlic and onion powders, pepper, paprika and dill into a large bowl. Gradually stir in enough water so that the mixture can be drizzled from a spoon.

Dip potato slices into the batter one at a time (to prevent sticking) and place in the hot oil and do not disturb for the first few minutes.  Fry until golden brown and crispy, stirring occasionally.  Remove and drain on paper towels.

* This is a modified version of a great recipe I found on allrecipes.com and to be honest, produces some of the best fries I’ve ever had.  You can skip the herbs and spices and just use a plan flour batter for the crispiest and lightest fries.  Enjoy!